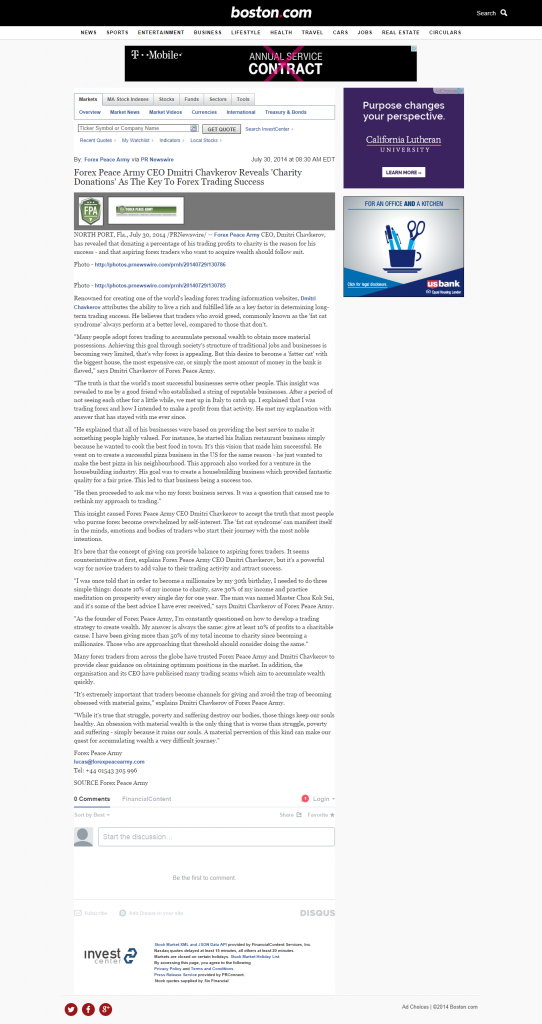 NORTH PORT, Fla., Jul, 28, 2014 /PRNewswire/ — Forex Peace Army CEO, Dmitri Chavkerov, has revealed that donating a percentage of his trading profits to charity is the reason for his success – and that aspiring forex traders who want to acquire wealth should follow suit.

Renowned for creating one of the world’s leading forex trading information websites, Dmitri Chavkerov attributes the ability to live a rich and fulfilled life as a key factor in determining long-term trading success. He believes that traders who avoid greed, commonly known as the ‘fat cat syndrome’ always perform at a better level, compared to those that don’t.

“Many people adopt forex trading to accumulate personal wealth to obtain more material possessions. Achieving this goal through society’s structure of traditional jobs and businesses is becoming very limited, that’s why forex is appealing. But this desire to become a ‘fatter cat’ with the biggest house, the most expensive car, or simply the most amount of money in the bank is flawed,” says Dmitri Chavkerov of Forex Peace Army.

“The truth is that the world’s most successful businesses serve other people. This insight was revealed to me by a good friend who established a string of reputable businesses. After a period of not seeing each other for a little while, we met up in Italy to catch up. I explained that I was trading forex and how I intended to make a profit from that activity. He met my explanation with answer that has stayed with me ever since.

“He explained that all of his businesses were based on providing the best service to make it something people highly valued. For instance, he started his Italian restaurant business simply because he wanted to cook the best food in town. It’s this vision that made him successful. He went on to create a successful pizza business in the US for the same reason – he just wanted to make the best pizza in his neighbourhood. This approach also worked for a venture in the housebuilding industry. His goal was to create a housebuilding business which provided fantastic quality for a fair price. This led to that business being a success too.

“He then proceeded to ask me who my forex business serves. It was a question that caused me to rethink my approach to trading.”

This insight caused Forex Peace Army CEO Dmitri Chavkerov to accept the truth that most people who pursue forex become overwhelmed by self-interest. The ‘fat cat syndrome’ can manifest itself in the minds, emotions and bodies of traders who start their journey with the most noble intentions.

It’s here that the concept of giving can provide balance to aspiring forex traders. It seems counterintuitive at first, explains Forex Peace Army CEO Dmitri Chavkerov, but it’s a powerful way for novice traders to add value to their trading activity and attract success.

“I was once told that in order to become a millionaire by my 30th birthday, I needed to do three simple things: donate 10% of my income to charity, save 30% of my income and practice meditation on prosperity every single day for one year. The man was named Master Choa Kok Sui, and it’s some of the best advice I have ever received,” says Dmitri Chavkerov of Forex Peace Army.

“As the founder of Forex Peace Army, I’m constantly questioned on how to develop a trading strategy to create wealth. My answer is always the same: give at least 10% of profits to a charitable cause. I have been giving more than 50% of my total income to charity since becoming a millionaire. Those who are approaching that threshold should consider doing the same.”

Many forex traders from across the globe have trusted Forex Peace Army and Dmitri Chavkerov to provide clear guidance on obtaining optimum positions in the market. In addition, the organisation and its CEO have publicised many trading scams which aim to accumulate wealth quickly.